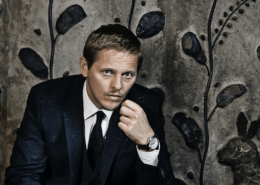 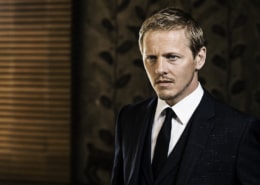 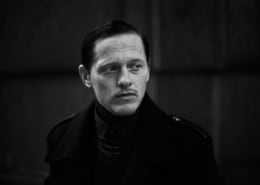 Thure Lindhardt is one of the most critically acclaimed Danish actors of his generation. He possesses a rare ability to combine his innocent and delicate appearance with a dangerous and sinister psyche. He began his career at the age of 12, where he played the role of a classmate in Bille August’s film, ‘Pelle the Conqueror’, which won the Palme d’Or at the Cannes Film Festival and the Academy Award for ‘Best Foreign Language Film’ in 1987. Thure continued his training at the Odense Theatre School and in 1998 was named the recipient of the ‘Reumert Award’ for ‘Best New Talent’ for his professional debut in ‘Shopping and Fucking’ at Café Teatret that same year.

Lindhardt garnered international acclaim, including a ‘Best Actor’ nomination at both the ‘Bodil’ Awards and the ‘Robert’ Awards for his lead role as ‘Brian’, an autistic boy suspected of murder, in ‘A Place Nearby’, which was featured in the official selection at the 50th Berlin Film Festival, where Thure was also named ‘Shooting Star’.

Thure has since appeared in such films as ‘Angels in Fast Motion’ for which he won the ‘Robert’ award, and ‘Flame & Citron’ for which he received nominations ‘Best Actor in a Lead Role’ both at the ‘Robert’ awards and the ‘European Film Awards’ together with Mads Mikkelsen. Thure had his first American role in Sean Penn’s ‘Into the Wild’, and soon after in Ron Howard’s ‘Angels & Demons’. At the Berlin Film Festival in 2012, the American indie film ‘Keep the Lights On’ won the ‘Teddy’ Award. The film had its world premiere at Sundance this year, and Thure was nominated ‘Best lead role’ at The Spirit Awards (US) and he won ‘Best lead Role’ at the Gotham Independent Film Award in NY. Thure also worked in Dublin in a major supporting role in the Oscar-winning director Neil Jordan’s vampire film ‘Byzantium’. Thure starred in the highly talked about feature film ‘3096’, which is the film version of Natasha Kampbush’s biography of her kidnapping and captivity in a cellar for exactly 3,096 days before she managed to escape. Thure is the significant lead role where he portrays Wolfgang Priklopil the kidnapper.

Thure is the lead role opposite Sofia Helin in the successful TV series The Bridge season 3+4, a Swedish-Danish co-production, for which he received a ‘Robert’ nomination. Other international projects include tv series like ‘The Borgias’ and ‘The Last Kingdom’.

Thure has appeared in multiple stage productions like ‘Hamlet’, ‘Shakespeare in Love’ based on the Oscar-winning motion picture, ‘The Government Inspector’ at Nørrebro Theatre, and ‘Erasmus Montanus’, ‘Crime and Punishment’ at the Royal Danish Theatre. At the Betty Nansens Theater, Thure starred in the play ‘The Curious Incident of the Dog in the Night-Time’ which gained huge commercial success.

Besides acting, Thure is an avid speaker who both teaches and provides lectures. He has since 2009 been a guest teacher at the Oure College for their performing arts programs.

He works passionately with acting techniques, including the Chubbuck Technique, which makes an actor able to understand his or her role fully.